I have recently overheard the following in regard to “selling more APs.”

“Just go with one AP per classroom. It’s easier.”

“We recommend an 8-radio array per classroom for future proofing.”

I’m in no way poking at any vendor here. If anything, I’m poking at those who design and install Wi-Fi networks. I’ve heard the “two APs per classroom” thing more times than I can count. One AP per classroom can be an acceptable (or even good) deployment strategy when proper design techniques and processes are used. There has never been a time when deploying 8 radios (whether via array or individual APs) per classroom (or any room smaller than an auditorium or cafeteria) has made sense. #JustSayin

My company, Divergent Dynamics, is a Wi-Fi Systems Integrator. We’re also a Value Added Reseller (VAR) for some vendors. Being in this role, I certainly understand the desire to “sell more APs”, but integrity dictates that my customers’ best interests are my ‘prime directive.’ “Sell more APs” and integrity may seem to be at odds in this scenario, but in fact, that’s not the case. It took going through what I like to call “NextGen Wi-Fi Design” in order to figure out how manufacturers, VARs, and customers may now get what they all want through proper design techniques.

I’m very fortunate to have a very large customer who believes in “getting it right” and has enough funds to follow through on deploying the best Wi-Fi design possible. The purpose of this blog is to outline some of my “lessons learned” from working with this customer and to show how everyone benefits from good network design.

Today’s enterprise Wi-Fi networks should either be completely on 5GHz or primarily on 5GHz (while moving off 2.4GHz as quickly as possible). 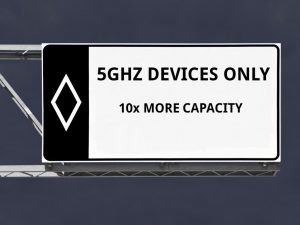 While there are lots of folks in the industry who would argue against me on this, I believe that anyone still heavily relying on 2.4GHz is behind the curve and setting themselves up for a rude awakening here soon. When engineers argue in favor of 2.4GHz, I usually ask them to show me a clean 2.4GHz environment with lots of non-overlapping channels. Barring a physics-defying response, I usually win the argument. I believe that most folks understand that 2.4GHz (as it relates to Wi-Fi) is on life support, and will soon be utterly dead. Some folks argue against this notion only in an attempt to justify not going forward with the inevitable expenditures associated with a 5GHz centric network. I suggest that you get the inevitable pain over with now and leave 2.4GHz for Bluetooth, Zigbee, and other non-WiFi uses.

Note: Radio Resource Management (RRM) algorithms need to have an option that allows administrators to essentially “sprinkle” DFS channels between non-DFS channels for maximum client compatibility. This is easily done, but I suppose that vendors haven’t yet considered this. If you’re a vendor, and are reading this, please consider this a feature request.

With more available channels & airtime, no band steering issues, and no worries of poor client device drivers trying to pull devices over to an interference-laden 2.4GHz band, VoWiFi is obviously going to work much better. The same holds true of Location Based Services (LBS), Emergency Response systems, and more.

What’s also important to consider is that by removing Wi-Fi from 2.4GHz, other important platforms will now have less interference, such as Beacons (BLE), Zigbee (sensors), cordless headsets, etc. If you get lucky, your neighbor’s client devices will prefer 2.4GHz and will stay off your nice new 5GHz bands!

5GHz doesn’t penetrate as well as 2.4GHz, and that’s a VERY good thing for adding capacity to your Wi-Fi network. If the walls within your facility cause significant RF loss (e.g. concrete, brick, or other), you may have 5GHz APs in many (or even most) rooms. When this is the case, it works well to locate dedicated sensors (aka scanner or monitor mode APs or sensors) in the hallways and/or other similar common areas on a 1:4 to 1:6 ratio of Sensors-to-APs. Such dedicated sensors are extremely useful for security monitoring (e.g. WIPS), performance monitoring, and troubleshooting (e.g. spectrum and protocol analysis). Note that if your vendor has spectrum analysis, protocol analysis, WIPS, performance measurement, and other diagnostic tools within their feature set, there’s no reason that you cannot “overlay” your infrastructure with dedicated sensor APs from the same vendor.

The reason 2.4GHz has survived as long as it has is that AP manufacturers continue to cater to the least common denominator, which is 2.4GHz. Some innovative manufacturers have realized the folly in this approach and have created dual-radio APs that can have both radios on 5GHz. Smart.

As I mentioned in the beginning, urging the customer to buy “more APs” doesn’t necessarily conflict with integrity, and in fact, the two could be very much aligned – provided there is a proper network design in place and a realistic purpose. More 5GHz radios can mean:

Buy more 5GHz APs. How hard is that?

4 thoughts on “A New Generation of Wi-Fi Design”