When our brother Keith Parsons took that historic swing on that faithful day in February 2014, he knocked the ball over the cheap seats, out of the stadium, and into the parking lot. It was the shot heard around the Wi-Fi industry. It was the Wi-Fi event of the year. It was Sid Bream’s slide. It was Hank Aaron’s 715. And now, looking back, we all know it was an event worthy of the hall of fame to be sure. What am I talking about?  The 2014 WLAN Professionals Conference in Austin, TX.

It was a who’s who of Wi-Fi. It was a smorgasbord of Wi-Fi knowledge sharing. It was cranial overload. It was weird gadgetry. No seriously, what the hell is all that stuff? 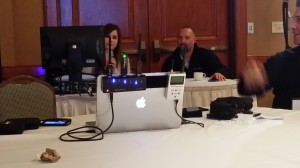 It was laughing, sharing, making new friends, and catching up with old ones. It was putting a face to a Twitter handle and the setting aside vendor biases. In a nutshell, it was all about the people.

I want to share with you my fondest memories of the event. I will carry them with me always as treasures, with value beyond compare.

A sizable group of us went out for BBQ, in the ridiculous cold, and decided on “Family Style”, which essentially means, “Just keep it coming!” We ate until BBQ was oozing from our ears. Wow, was it good. AirTight, Ruckus, Aerohive, and Aruba were represented at the table, and we had a wonderful time tosay the least. Everyone was picking at everyone else, and watching Abby Strong (Aerohive) and GT Hill (Ruckus) back and forth with the jokes is always fun.

The friendship represented at that table was more like family to me. I feel as close to that group as I do my own family at family reunions…perhaps more if I were honest. I mentioned that it was cold outside, and I wasn’t joking. Poor Julia Baldini (CWNP) was about to freeze to death while standing around outside after dinner, so, like the gentleman that he is, GT Hill loaned her his jacket, which as you can see, was a perfect fit…if she was headed to a camping party and needed a tent. 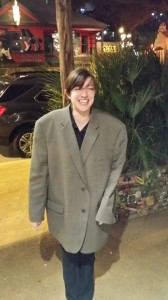 Getting to the restaurant was a fiasco, but we survived it. The group started off small in the lobby, but by the time we decided where to go, there must’ve been 20+ people. We were dividing up into cars and taxis and trying to relay to everyone the very odd and complex address. Even the cab driver was struggling with the address.

Special Note: GT proved the concept of my TEN Talk by trying, and failing, to race through rush hour traffic in his BMW M5. I will reiterate that you can only go at the speed of congestion no matter how fast your car is, and while squealing your tires may look cool, it just means that you have to replace them more often.

About 15 people actually showed up at the restaurant (the others got lost and ended up elsewhere), but we all had an amazing time together. A slightly different group than the first night, but for me, still a group consisting primarily of friends I’ve known anywhere from 4-12 years…and when I say friends, I actually mean something more like brothers and sisters…my family.

Tuesday, After Dinner, At The Bar

The GT Hill Show. It was a small circle of chairs….until it wasn’t. I think it grew to almost 20 at one point. Suddenly we were being interviewed, one by one, by our talk show host GT Hill. Where you from? What are your hobbies? What’s one thing that nobody knows about you? Around it went…but by the time it got to the last person, the whole thing was disintegrating into 5 different conversations, and blam, it was over as fast as it had begun. 🙂 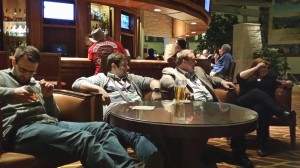 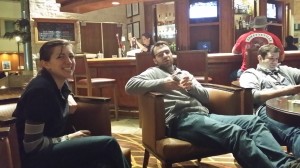 I sat talking to Peter Mackenzie (Marquest) and Julia Baldini for a really long time about Peter’s life, background, and Enneagram type. Fascinating and brilliant man, he is. We’ve been the best of friends for almost a decade, but I’ve known very little about his background until now. Incredible getting to know him better. I got a big kick out of how when Julia would introduce herself to people and add “from CWNP” to the end, they would say, “oh, THAT Julia!” I’ve found it delightful how she, as a young marketing professional, fits in so well among a bunch über Wi-Fi nerds. 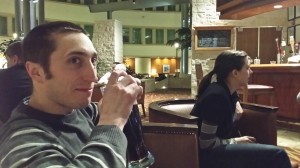 I was asked to “look into the HOLY SMOKES THAT’s BRIGHT light” for a couple of minutes and talk about the event. After a few minutes, I regained some small portion of my eyesight…and it seems from the following picture that others may have had the opportunity to look into the BRIGHT LIGHT also. 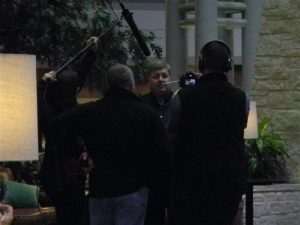 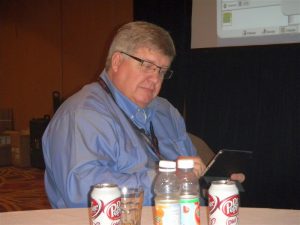 I was looking over the crowd of WLAN Pros in the bar area and remarked to a couple of members of the filming crew that this is my family. 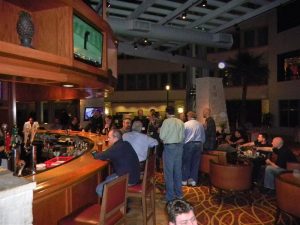 I’ve known many of them for what seems like all my life, and others I’ve only just met in person, but have known them online for years. I remarked about the beauty of seeing them all together, sharing of themselves in this way.

Jennifer Huber (World Wide Technology), Chris Lyttle (Accuvant), Keith Howe & Joel Brooks (North Kansas City Schools), and some others (entering and exiting the conversation) were near the bar talking about the Enneagram types and traits, Ecstatic Dance, Vinyasa Yoga, and lots of other exotic topics having a grand ‘ol time. I think Jennifer felt a bit sorry for me because she gave me at least 6 hugs to make me feel better. I didn’t know I was feeling that poorly, but hey, I’m not turning down hugs from anyone, especially friends! Keith Howe was watching the whole thing in amazement. Maybe he was kind of wanting a hug too?  🙂  We were having a great time comparing the similarities of Enneagram studies with all of the things that Jennifer had been recently studying (unrelated to the Enneagram). We were trying to figure out Jennifer’s Enneagram type, but not so sure we nailed it down before it was bedtime.

The thing that I appreciated more than anything else about the event was the time to really get to know some of my existing friends more deeply, like Peter Mackenzie, Chris Lyttle, Ryan Adzima (AirTight), GT Hill, and Julia Baldini.

I had some really great talks with a variety of others that I really appreciated such as VP Ketonen (7Signal), Chris Vainrib (Ruckus), Dale Buckey (Wi-Fi Solutions), Evert Bopp (Disaster Tech Lab), Jimmy Donohue, Joel Brooks, Keith Howe, and the list goes on.

I wish the event were 8 weeks long because I’d have lots of new best friends. The only limiting factor was time, and you can bet that if it’s any kind of possible for me to be at WLAN Pros 2015, I will be there. I just had to include one more photo, as it portrays the joy of this event. 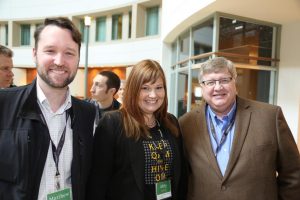